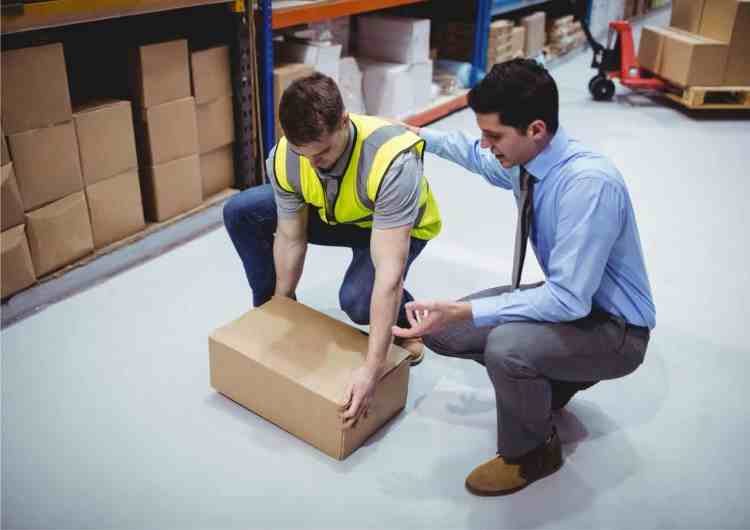 What is Manual Handling?

Manual Handling involves any transporting or supporting of any load by one or more employees, and includes lifting, putting down, pushing, pulling, carrying or moving a load, which by reason of its characteristics or unfavourable ergonomic conditions, involves risk, particularly of a back injury, to employees.

The Regulations lay out duties for both employees and employers.

They give a general requirement that employees must be trained to manually handle correctly including the use of any equipment their employer provides to handle loads safely.

Did you know…Manual handling causes over a third of all workplace injuries. These include work-related musculoskeletal disorders (MSDs) such as pain and injuries to arms, legs and joints, and repetitive strain injuries of various sorts.

Before You Lift, Ask Yourself...

A High Court action by a university corporate affairs manager, who injured her back while lifting a box of promotional brochures, was settled during the second day of the hearing.

The court heard the corporate affairs manager was attending a promotional event at a university in Budapest, where she was representing UCD. The box contained leaflets promoting the university.

The corporate affairs manager attempted to lift the box which was stored under a table at the university’s stand. As she was lifting the box off the ground, she felt a horrendous pain. She told the court it felt like somebody had stabbed her in the neck. She dropped the box.

She told the court that after dropping the box, she got somebody to open it and spread some brochures on the desk. She worked for about an hour. On her return to Dublin, she went to the A & E department in Beaumont Hospital.

The injured woman claimed that as a result of the accident she had been left with complex pain syndrome, suffers pain in her neck and down the side of her body and suffers from a condition that means her neck is tilted to the right.

She told the court that before the accident she liked to run and walk.

Her counsel told the court that she would love to work but had become a virtual recluse in her own home.

In her claim, the corporate affairs manager alleged the box of materials was too heavy for he to lift, that she was not notified of the weight of the box and the university had failed to provide adequate training in the manual handling of loads.

As well as her claim for damages for injuries, she claimed loss of earnings and pension totalling over 7000.000.

The university denied negligence and alleged contributory negligence. The university claimed the corporate affairs manager failed to take any account of the hazard presented by the weight and size of the box and claimed she could have removed the brochures without having to lift the box.

During the hearing, the injured woman was questioned about complaints of pain from before the accident in Budapest and asked how she could reconcile the statement that she had no ill-health prior to the accident. Responding, she said she was “having investigations but it did not stop my life. In the afternoon of the second day of the hearing, counsel for the injured woman told the court the case had been settling and could be struck out. No details of the settlement were disclosed.

Excerpt from the Health and Safety Review.

Do I Need to do a Manual Handling Course?

The manual handling course is aimed at employees at all levels who may undertake manual handling operations, including the transporting of a load of items by lifting, lowering, pushing, pulling, carrying, manoeuvring, steadying or transporting thereof by hand or by bodily force. This includes, but is not limited to, professions such as:

Manual handling training is about teaching your employees how to safely move heavy items either by lifting, carrying, lowering, pushing or pulling them.

It is within the best interests of employees and employers to carry out this kind of training to minimise the risk of injuries resulting in absences.

Please note that this is a Blended Learning Course.

It requires both a Theory and a Practical exam.

Free Trial On All Courses

Management of Manual Handling in the Workplace or the Guide to the Safety, Health and Welfare at Work (General Application) Regulations 2007: Chapter 4 of Part 2: Manual Handling.

This website uses cookies to improve your experience. We'll assume you accept this policy as long as you are using this websiteAcceptView Policy
Join Waitlist We will inform you when the product arrives in stock. Please leave your valid email address below.